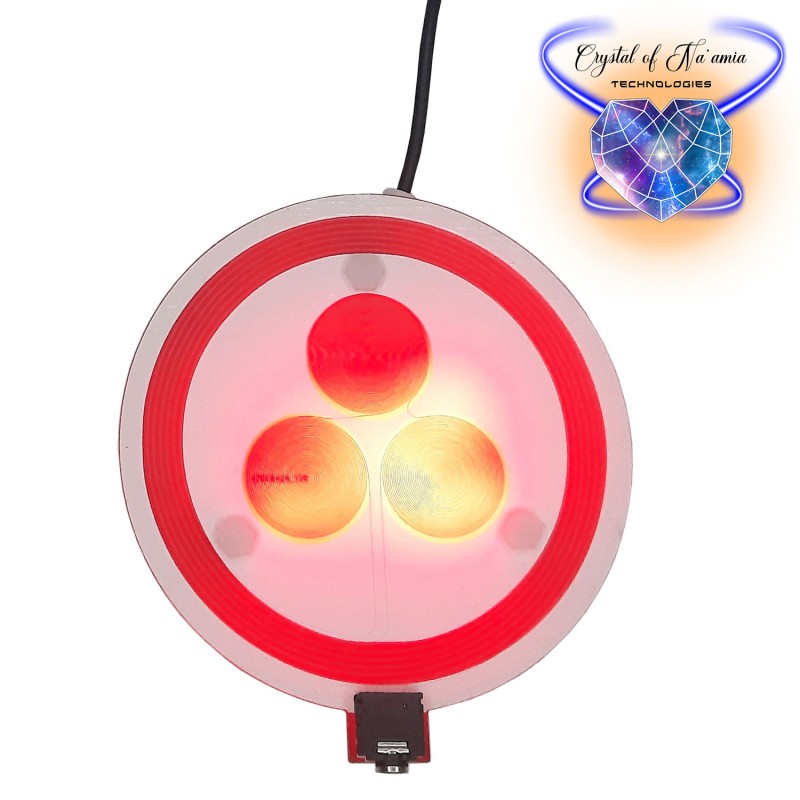 UNIVERSALIS PAX INCEPTIO (Latin motto meaning UNIVERSAL PEACE INITIATIVE) is a scalar wave generating technology allowing to work concretely and effectively on the energy of Peace through the morphogenetic field of the planet. Taking up the powerful energetic symbol of the Peace Banner, the aim of this initiative is to promote a global and durable peace through this symbol, by integrating a pro-active dynamic and proposing another alternative than the endless flags used by all the states of the world.

UNIVERSALIS PAX INCEPTIO is proposed in two declinations of scalar schemes (above) composed of 3 secondary interconnected coils to a large circle composing the primary coil; a version with a diameter of 10 cm, illuminated and feedable in frequency via a classic 3,5 mm audio jack and an MP3 player (MP3 player not supplied), a Magnus version with the same properties but with a diameter of 20 cm (click here to access the Magnus 20 cm version).

The Banner of Peace is a universal symbol representing unity in diversity, to achieve a better world promoting respect for all beliefs. It was unanimously accepted by all the countries of America on April 15th, 1935 at the White House in Washington, by the signature of the Roerich Pact for the Peace with the aim of preserving the cultural heritage of humanity. The Roerich Pact was ratified in 1937 by all member countries of the League of Nations, precursor of the United Nations.

(Source: website of the International Committee of the Banner of Peace)..

Nicolas Roerich (1874-1947), a Russian symbolist painter, has traveled a lot in Russia, India, Tibet and in the United States. He hoped that by using a universal symbol, no cultural group would feel excluded.

In the banner, magenta symbolizes the color of blood, which is the same for everyone. The three red circles placed in a pyramid represent respectively: Spirituality, Art and Science.

Spirituality is above (every religion and faith has its truth and validity), Art and Science are below, next to each other. The circle around them represents culture, unity art, science and spirituality; the humankind...

CRYSTAL OF NA'AMIA TECHNOLOGIES has developed a short video allowing you to generate the energy of PEACE within yourself and through the principle of morphic resonance and UPI technology, on the whole of humanity through the morphogenetic field of the planet. For a lasting and global peace it is of course necessary first of all to be at peace with oneself and others around you. This consciousness inducing video aims at this benevolent purpose and to extend it to the rest of the world.

Three "technologies of augmented spirituality" intervene in the structure of this video accessible via the following Youtube link: Click here.

2- a binaural sound of 39 Hz (with the addition of a violin sound to make it more pleasant) obtained by the cerebral synthesis of the 221 Hz "pure tone" frequency broadcast on the left channel and the 260 Hz "pure tone" frequency on the right channel. This synthesized sound is a powerful energetic activator in connection with the 5D vibration of Gaia, which through the Schumann resonance starts at 7.83 Hz and gradually rises to 39 Hz, causing tensions to the unprepared human psycho-energetic systems. This video also aims to prepare humans on a daily basis for this vibratory rise of Gaia through stellar influences;

3- images of energetic transmutations of the vibration opposite to peace for the Yang/objective/masculine side, alternated with images of pure Joy and Peace to stimulate the right brain Yin/abstract/feminine and bring balance to this work in the polarity of service to others.