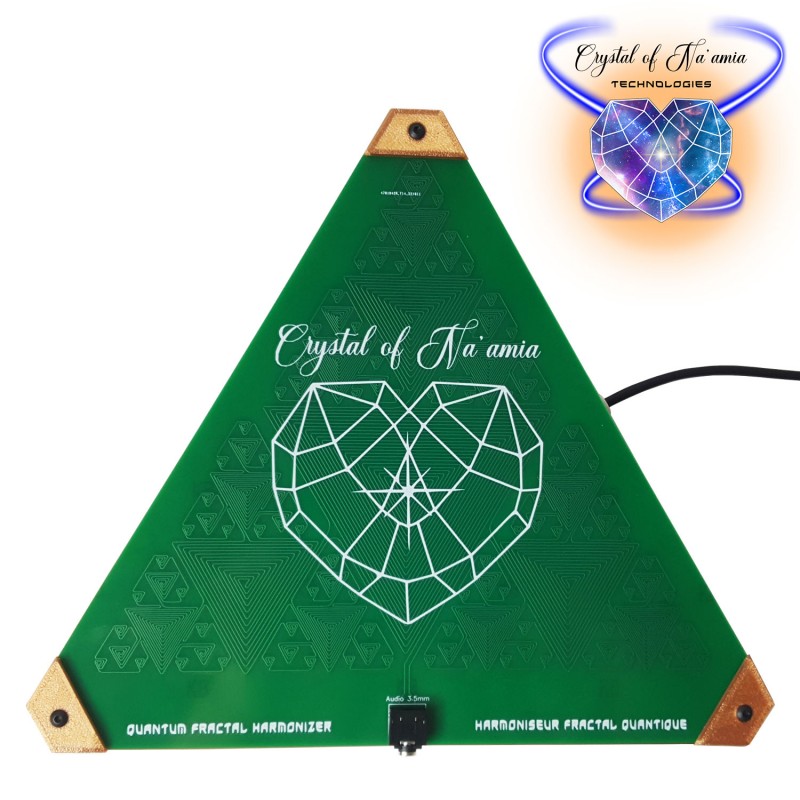 The Quantum Fractal Harmonizers represent an inexpensive and accessible yet powerful solution to use a Crystal of Na'amia scalar technology and consciously participate in the deployment of the LOGIN network (Link).

This new "consciousness optimizing mirror" takes a fractal geometry established by a Polish mathematician in 1915 (Waclaw Sierpiński) and redesigned by us into a scalar torsion field emitting coil. This Sierpiński pattern constituting the scalar emitting board, is formed by an equilateral triangle, itself subdivided into smaller equilateral triangles and that to infinity, which makes it a fractal structure corresponding to what is called a Fronar, that is to say the fundamental energetic structure composing our Universe.

The frequency is no longer a "pure tone" frequency injected through a signal generator as with the Metatron Series technologies, but an audio frequency via the supplied MP3 player (optional) or your own player or even your cell phone which can be used as a player.

Each scalar board of this technology of consciousness is provided with 121 interconnected triangles traversed by the energy of the chosen frequency and the emitted scalar wave, thus contributing to establish a powerful vortex of energy allowing to charge and harmonize energetically your crystals, jewels or any other object placed in its center. Its harmonizing function does not only stop at the charge of the object but the whole house benefits from the protective vibration against harmful electromagnetic waves, emitted continuously or sporadically according to your needs.

The Quantum Fractal Harmonizers (HFQ) are available in five colors that can stimulate by resonance your chakras, these energy centers of the human being radiating all along the spine.

ABGAL-HFQ of green color in resonance with the Heart chakra for the energy of Compassion. The term Abgal in Sumerian means "The Sages of Sirius".

KADISTU-HFQ of purple color in resonance with the Coronal chakra for the Cosmic Connection. The term Kadistu in Sumerian means "The Ancient Assemblers of Life".

KIRISTI-HFQ of blue color in resonance with the Throat chakra for Sacred Communication. The term Kiristi in Sumerian means "Burning Sons of Life" and "Fish of the Stars."

NAMLU'U-HFQ of red color in resonance with the root chakra for grounding and connection to the Earth. The term Namlu'u in Sumerian means "The Mighty".

SOLIENATUS-HFQ of white color in resonance with the energy of Purity. The term Solienatus in Sumerian means "Twice born of the Sun".