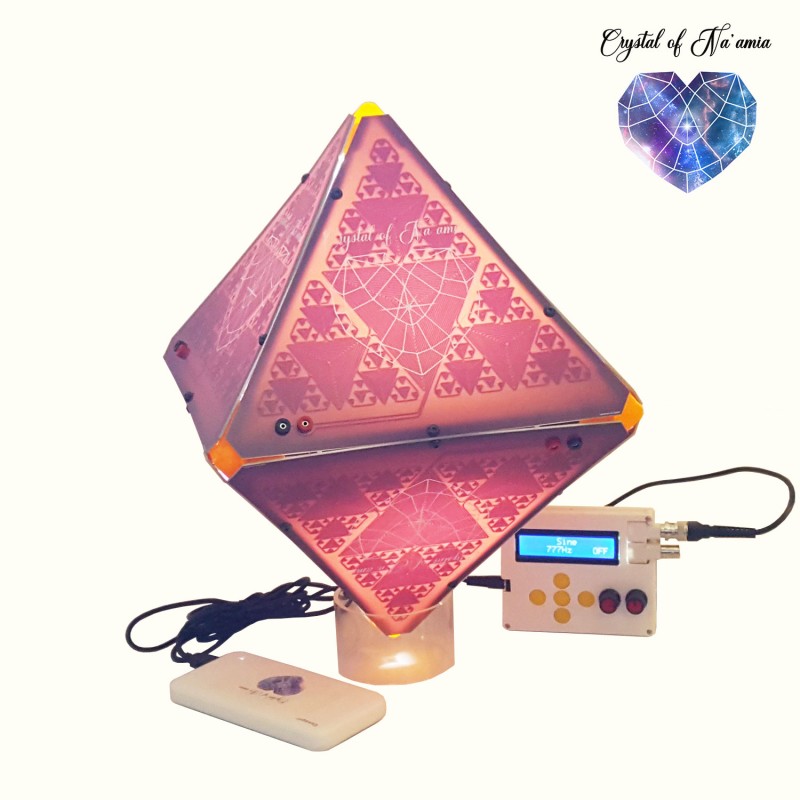 The Octahedron Magnus (OM) is an octahedron belonging to the five Platonic polyhedra better known as "Platonic Solids". Its original purple color emits a vibration in resonance with the coronal chakra Sahasrara (lotus with a thousand petals) allowing the connection with cosmic energies. Its self-reflecting three-dimensional shape is made up of eight equilateral triangular faces, assembled in two pyramids symbolically and energetically connected to the air element of our planet.

For the Egyptians, the pyramids represented a divine staircase allowing the deceased pharaoh to ascend to the solar principle embodied by the God RA. The octahedral shape also represents what Plato called "the soul of the world", a manifested pyramid in our reality completed by a subtle unmanifested pyramid. The four edges of the pyramids projecting towards the sky are in reality the cosmic counterpart of a subterranean matrix pyramid embodying the energy of Mother Earth, which is perfectly manifested by the octahedron.

The latest in Metatron Series technology, this consciousness optimizing mirror is more powerful than its predecessor the Aer Octahedron, due to its size and the 8 interconnected scalar plates each engraved with 121 fractal triangles. In total there are 968 fractal triangles, all harmoniously connected to each other, which produce a vortex oscillation of the subtle magnetic field or scalar torsion field. This field is also "tinged" with the frequency vibration introduced by the operator through a signal generator, which can be provided depending on the option chosen. This combination of shape waves and frequency signals facilitates the creation of a more extensive and beneficial vibratory field for the living, which makes the Octahedron Magnus suitable for collective healing and reharmonizing emissions or for more global reach and purpose than its predecessor.

Please take into account this increased power/consciousness ratio before placing your order.

The basic octahedron comes with a USB cord with a switch and an adapter to plug it into the mains.
You can select option 1 to add a signal generator and a stand-alone external USB battery.
You can also select option 2 to get a turnkey kit with the generator, the external battery and a carrying bag.

You can find the frequencies and additional information on the United Universe Andiana website.